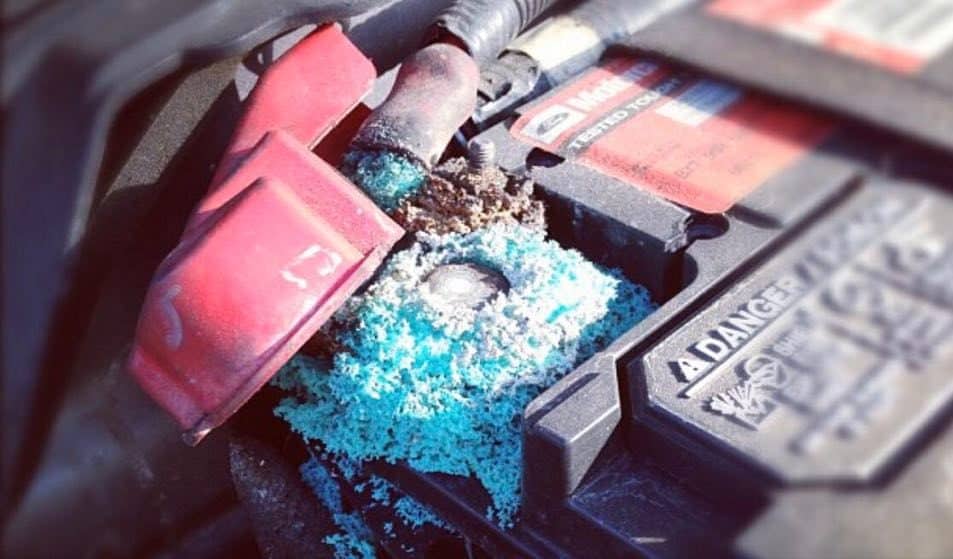 Noticing corrosion on the car battery is never a good sign and it should be looked at as soon as possible. It’s a clear indication that there is an issue with the battery and it can become problematic if left to corrode even further.

Most corrosion begins on the positive terminal because it’s overcharging in order to compensate the issue. The corrosion itself is caused by hydrogen gas being released from the sulfuric acid inside of the battery. This then reacts with its environment and causes the car battery corrosion to occur upon the terminals.

Below is a list of the most common causes of car battery corrosion.

Overcharging your car’s battery is one of the most common causes of car battery corrosion. It raises the temperature of the battery and causes the electrolyte content inside of the battery to expand in size and contribute to the pressure inside. Using old car battery chargers that don’t have a float mode function will cause overcharging issues if left connected.

Copper is a good conductor and doesn’t corrode easily but when electrical current passes through, there is a production of copper sulfate. This leads to corrosion on the battery terminals and is usually in the form of a bluish-green crystallized formulation.

Leaking electrolyte is a common issue with aged or damaged batteries and usually passes through to the battery terminals. Lead-acid batteries requiring refilling or spillages may become more common and may be mistaken for leaks if not cleaned up.

4. Age of the Battery

Batteries aren’t designed to last centuries and they require replacement in order to restore maximum performance. Older car batteries may shown signs of cracking and allow leaks to pass, which is usually through gaps near the battery terminals.

An obvious issue that causes car battery corrosion is by simply overfilling it with water. This causes electrolyte to leak through and corrode the battery terminals. Ensuring that you pour the correct amount is crucial and avoids corrosion.

How to Remove the Corrosion

Using baking soda is by far the most popular solution for removing corrosion. With the battery disconnected, you can simply pour baking soda upon the corroded areas and work it in using a brush (or even a toothbrush) until its removed. It’s a well documented method of removing corrosion and one that we would recommend.

If you don’t have any baking soda and want a quick fix, simply using a soft drink is a great alternative. Most contain carbonic acid, which has similar qualities to baking soda and can remove some of the car battery corrosion.

There are many dedicated products on the market that are ideal for removing corrosion on a battery. Although they are more expensive than using a baking soda solution, they have been designed and tested specifically for corrosion upon batteries.

If you are unable to locate the cause of corrosion appearing upon the battery, we advise that you use a car battery tester for further diagnostics. This may uncover undetectable causes that may have taken hours to locate without a tester.

We highly recommend that you attempt to clean the battery to the best of your abilities and regularly check for further corrosion. Failing to fix the car battery corrosion issues may lead to further issues with other components of your car.