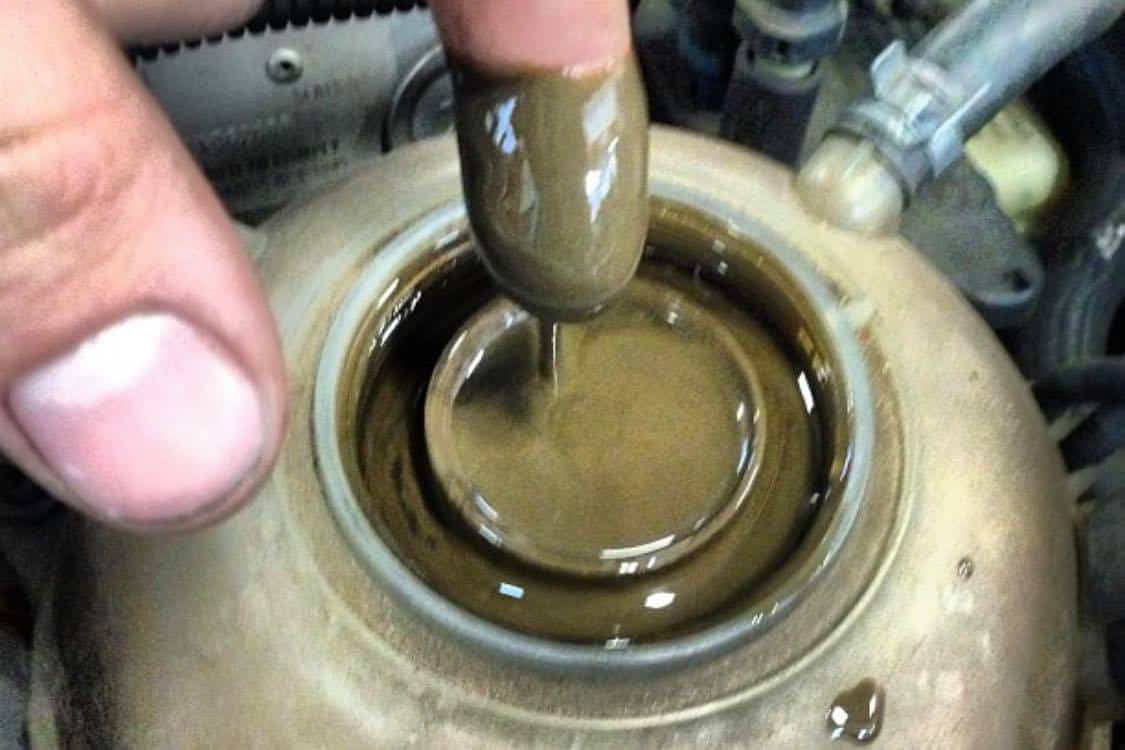 An engine coolant, often referred to as antifreeze is used to maintain the temperature of the engine. However, if you check the reservoir and it’s a brownish or milky color (as shown above), this would indicate that there is oil in the coolant. You could have the best rated antifreeze on the market but if its mixing with oil, it won’t be able to perform as it should.

What are the Symptoms?

The obvious symptom of oil in the coolant reservoir is of course the visual colour of the fluid. Brown milky sludge is a clear sign that there is something wrong. However, in the early stages of oil leaking into the coolant reservoir, there may only be a small layer of oil buildup.

Below are the four most common likely causes of oil in the coolant reservoir.

The most common cause of oil in the coolant is a failing head gasket. Oil leaks from the cooling passages and directly into the coolant. This causes brown sludge to appear in both the coolant and at the top of the radiators. It can also leak into the combustion chamber, which can be confirmed by the white exhaust smoke and a distinctive sweet smell.

A failing head gasket can be confirmed with a compression test and will require extensive repairs to be made if it has failed. As a temporary fix, many people may use a head gasket sealer. However, the correct repair procedure should include replacing the head gasket, flushing the coolant and inspected the radiator and water pump for any damage.

Leaking oil coolers can be harder to diagnose than a failing head gasket because it won’t effect the engine performance. However, it may produce visible black smoke and even vibrations, which is an indication of a failing oil cooler. The oil cooler and gasket will need to be replaced and the cooling system flushed to prevent oil entering in the coolant once more.

Excessive heat within the cylinder head or engine block can cause cracks to appear. This will lead to motor oil leaking into the coolant reservoir as well as other places within the engine. This type of damage is enough to warrant a complete new engine as the repair bills can be excessive and may even be more than the car is actually worth.

Although not as common, automatic transmission fluid may leave the transmission cooler. This is caused through cracks between the radiator and cooler, which may become mixed into the coolant. If the coolant managed to flow the other way, this could be even worse because it can enter the transmission and reduce the fluids lubricity.

The mixing of coolant and oil is a recipe for disaster as they both serve a different purpose. Oil is a far thicker liquid whereas coolant is more like water but when they mix in the coolant reservoir, the overall outcome will not cool the engine. This will lead to the car overheating as well as a number of other potential issues.