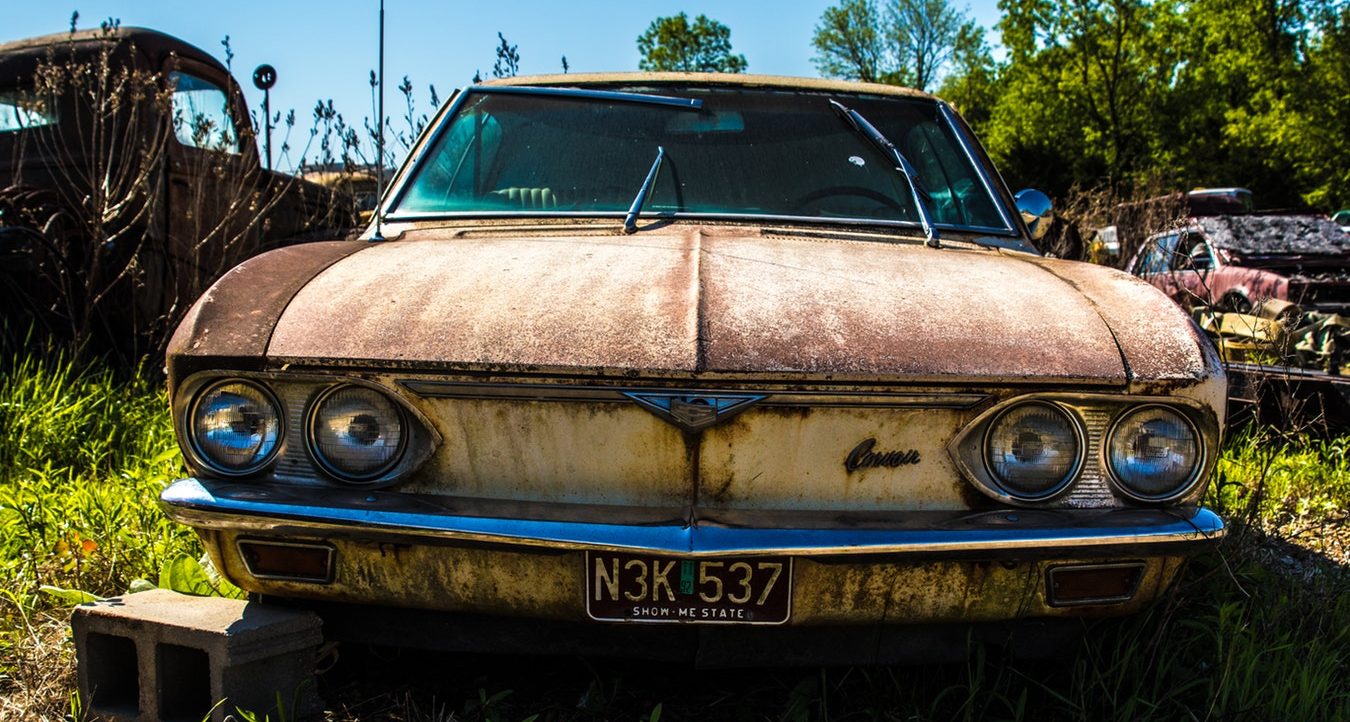 When it comes to removing rust from a car, many people think of a wired brush attachment and a rust prevention paint. However, by using a rust converter, you are able to penetrate rust, which causes a reaction that create a new polymer compound.

The best rust converter is the Corroseal Water-Based Metal Primer, which paints, primes and convert rust all in one simply formula that is easy to apply.

Rust will develop on your cars bodywork or underbody but if you are able to catch it early enough, you can stop the rust from spreading. Rust converters can be used on a variety of different areas of your car but should only be used directly on rust.

Application of a rust converter is fairly simply and they can either be sprayed or painted onto to the work area. Once applied, you will have to wait until the formula dried and the conversion of rust to a new compound takes place, which is usually around 24 to 48 hours.

It is important to note that the majority of rust converter are made with a phosphoric acid. This needs to be used with care and we recommend your wear protective gear to prevent any contact with the skin as Phosphoric acid will burn your skin.

If you need to remove rust easily without too much prep work, using a rust converter will do exactly that. Below is a list of the best rust converters that will fully cure heavy areas of rust and are easy to apply.

The Corroseal Rust Converter is one of the most popular on the market due to the fact it will paint, prime and convert the rust all in one step. It is a water based formula with a latex metal primer that can be cleaned off with water and soap.

Features of the Corroseal Water-Based Rust Converter include:

Corroseal was developed for the marine industry where metal surfaces are heavily in contact with the salty marine environment. Therefore, you have peace of mind that this rust converter is more than capable to take on automotive rust.

Overall, it is the best rust converter for cars that doubles up as a primer too. It also has the added benefit of being able to be cleaned with just water and soap, which is very handy for spillages on your garage floor.

The Rust Converter ULTRA does exactly what it says on the bottle. Compared with the Corroseal above, this rust converter is able to cover 500 square feet with just 1 gallon of the formula, which is more than double of the Corroseal.

In terms of the features of the ULTRA formula, it includes:

As it is an oil-based formula, it will not be able to be cleaned as easily as the Corroseal and it is will more harmful too. Therefore its essential that you wear protective clothing and use the formula with caution.

Overall, if you are looking for “bang for your buck“, the Rust Converter ULTRA by FDC will provide exactly that and convert the toughest of rust with ease.

Evapo Rust is one of the safest rust removers as it does not contain any strong acids and is safe on the skin in case of any spillages. It is even biodegradable and will not harm the environment and still effectively removes tough rust.

Features of the Evapo-Rust include:

For those that are worried about causing any damage to other metals, this is one of the best rust converters for you. It is completely harmless to other metals, so if you accidentally spray past the rusted area, there will be no issues whatsoever.

Overall, it is the safest rust converter that will remove tough rust on cars with ease. On top of this, the Evapo Rust formula is relatively cheap too, so you get excellent value for the money.

Gemplers rust converter is an water based formula that functions as a highly effective primer that is ready to be repainted in just 48 hours once fully cured. Gempler recommend that you use a wire brush to remove loose rust and then apply the rust convert via a brush of sponge.

In terms of the features, the Gemplers Rust Converter includes:

Overall, it is an effective rust converter that covers well but its slightly on the more expensive side compared to the above alternatives. However, Gemplers are a reputable brand and worth paying the extra for.

The MRO rust converter comes in one size only (1 gallon) and converts rust into a slick polymer resin coating that is resistant to further corrosion. The conversion is instant and MRO even guarantee that the rust will not reform.

In terms of the features of the MRO Chem Black Star, it includes:

Overall, it is a powerful rust converter with a large coverage per gallon. However, it is fairly expensive to purchase by the gallon compared to the alternatives within this article but if budget is not an issue, its one of the best.

Rust forming on your car can be very frustrating and worrying at the same time. The corrosion will spread overtime and eventually cause big problems that can result in an expensive repair. Sorting the rust before it gets out of hand is highly advised and can be done so with a rust converter.

Its important to note that the majority of rust converters must only be used on rust and not all metals. Failing to comply with this could result in a serious chemical reaction, which will be expensive to put right.

Before applying a rust converter, we strongly recommend removing any loose rust already present. Once cleared, the rusty surface is perfect to be converted into an anti-rust polymer compound. In terms of application, most are are a thin formula that can be either sprayed or painted onto the work area with a brush.

Some formulas are less viscous than others and are easier to spray but you will have the drawback of the thinner solution being prone to overspray. A thinner rust converter may also require multiple coats for the best result. Opting for a thicker formula will mean you are able to reduce the spillage but it will be harder to spray, so its would be easier to paint onto the work area. 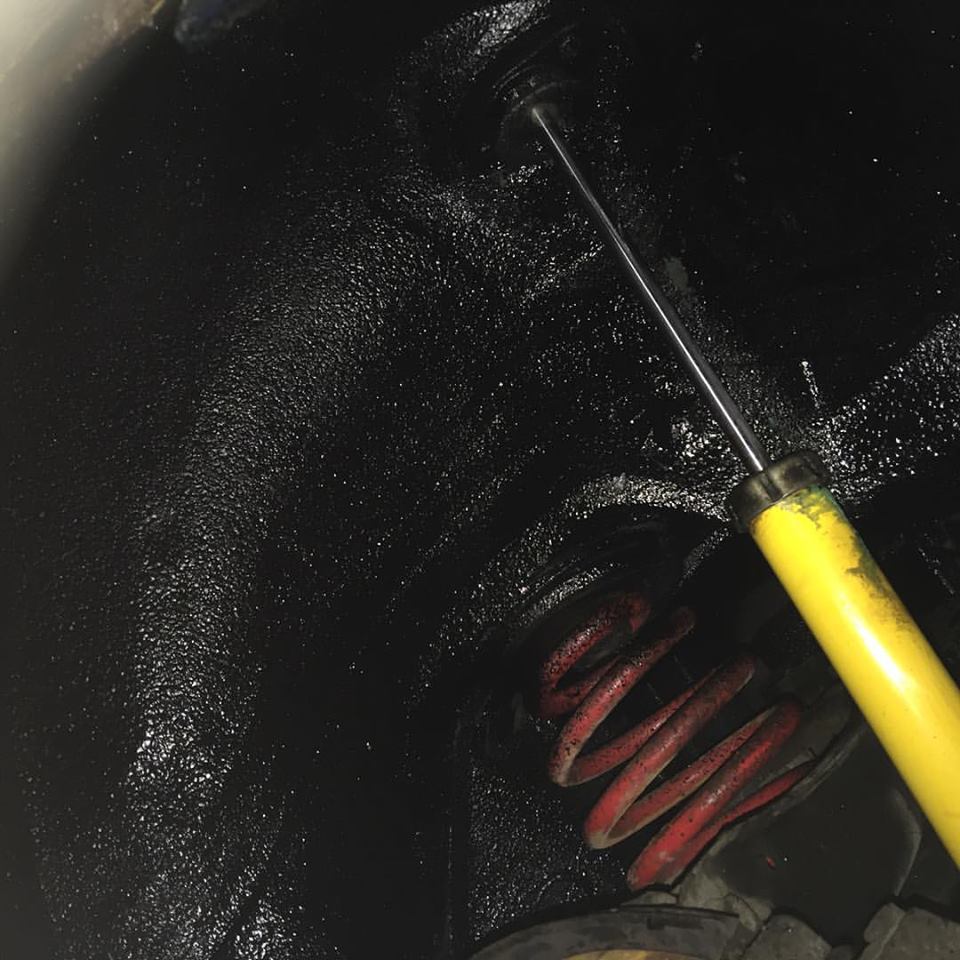 In order to get the best results from using a rust converter, its important that you let you formula completely dry out. Most formulas will take around 48 hours to completely dry out and cure. We recommend that you do not take your car out on the road during that period as you run the risk of allowing elements form inside the wet formula.

The above photo was taken just 1 hour after applying a rust converter and as you can see, its still fairly wet. Drying time is crucial to ensure you get the attended results.

Cleaning up the Overspray

No matter how careful you are when applying the rust converter, you will always manage to get some sort of spillage. Some brands will include active ingredients that will make the cleaning process that much easier. However, those that have a phosphoric acid formula may find cleaning that much harder.

Always try and cover around the work area to avoid unintentional spillages, which could actually cause expensive damage.

As you can imagine, using a rust converter is not something that you will want to have in your eyes or skin. Some rust converters are far more toxic and far more harmful to your skin and eyes, which may cause a burning sensation.

When using the converter, it is highly recommended that you wear protective clothing such as gloves and glasses. If you do get any on your skin, wash it off straight away and if you feel any burning afterwards, seek medical attention.

The majority of rust converters will state a coverage per gallon to help you gauge an idea of how much you will require. Per gallon, an average coverage would be around 400 square feet but of course, there are some that do far more and others that do less. Depending upon the type of rust that you are treating, you may receive far different results to what is stated upon the bottle.

Investing into a quality rust converter will make treating rust far easier and more effective. We highly recommending using this product prior to applying any form of rust prevention paint or spray. This will provide the best form of treating the rust and ensure that it does not come back.

All of our recommendations within this article are popular throughout the US and will effectively treat rust with ease.