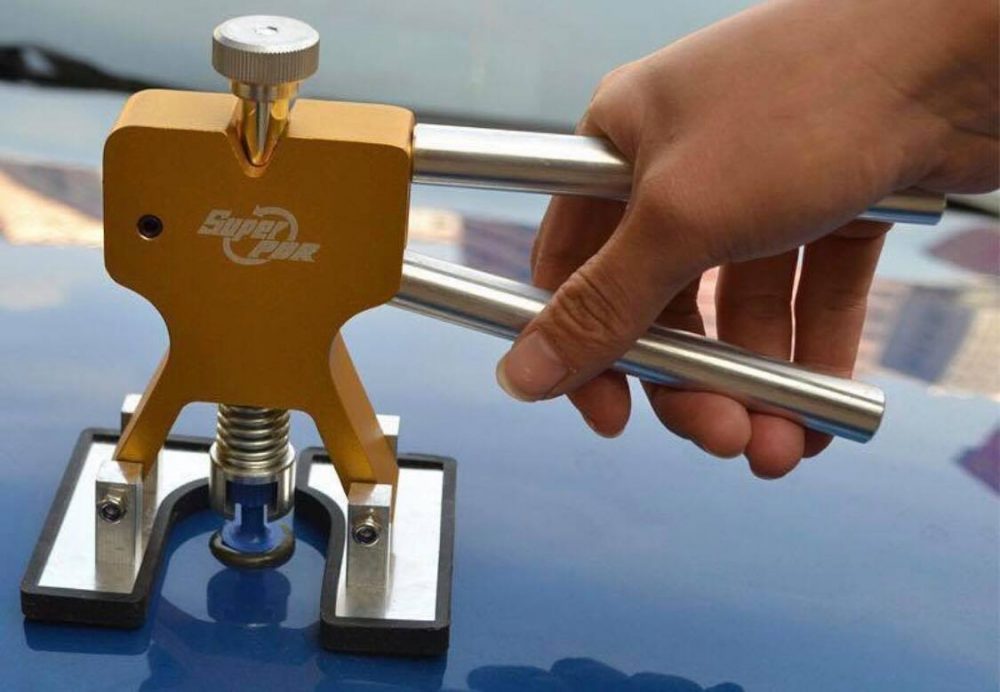 Unwanted dents can completely ruin the appearance of your car but they can be easily removed using a dent puller. These tools are available as complete paintless dent removal kits, suction cups and precision removal rods.

The best dent puller is the BBKANG Paintless Dent Repair Kit, which includes a variety of tools to tackle most car dents no matter how big or small they are.

An auto body shop can professionally remove most dents but they may charge at least $200 or more to do so. By using paintless dent repair tools, you can easily remove the dents yourself at a cheaper cost and reuse the tool for any future dents.

Removing dents from your car requires no expert knowledge or professional tools. Anyone can remove dents with the correct tools and better still, its far cheaper than auto body shops.

Most kits are available with a range of different pieces, which are designed to tackle any dent sizes. We highly advise that you spend slightly more for additional pulling tabs.

Below is a list of the best dent pullers that are available in the form of paintless dent repair tools, suction cups and removal rod kits.

The BBKANG dent removal kit is designed to tackle both small and large dents found upon your paintwork. The complete kit comes with everything you require and is available as a 35, 40, 41 and 60 piece kit to best suit your requirements.

Car dents can be caused by even the smallest of impact damage and form a dent in the bodywork that varies in size. Therefore, having multiple sized tabs such as this BBKang kit will allow you to tackle each and every dent.

Other features of the BBKANG Paintless Dent Repair Tools include:

It’s the best paintless dent repair tool kit that offers far superior quality when compared to similar priced alternatives. Everything you need to tackle dents is included and it’s everything you require at an affordable cost.

An alternative approach to tackling car dents is to use professional dent removal rods. The Mookis package is a 20 piece kit that include 10 rods and various other accessories that will help you pull a range of dents out of the paintwork.

Unlike many of the alternatives, these paintless dent repair tools are of a professional quality and built to last. Although they come with a premium price tag, it’s a worthwhile investment that you won’t regret.

Other features of the Mookis Paintless Dent Removal Rods include:

Overall, it’s a professional car dent removal kit that requires slightly more involvement but is very effective at pulling out car dents. The Mookis Rods also benefit from not requiring any glue during the removal process, which may mark the paintwork

One of the more popular DIY methods of car dent removal is to use a suction cup. It’s the cheapest and easiest methods of attempting to pull out a car dent, which can also be very effective with some dents.

Compared to similar priced alternatives, this dent puller is built to much higher standards. For example, it’s constructed of an aluminum alloy, which can withstand years of heavy duty usage and it even comes with an ergonomic handle grip.

Other features of the Yoohe Suction Cup Dent Puller include:

There are cheaper car dent pullers that use a suction cup but you really do get what you pay for. Many use cheap plastics within their construction but they simply won’t last. However, with an aluminum construction, the Yoohe dent puller can withstand a lot of heavy duty use and can be a cheap fix for pulling out dents.

Super PDR is a popular dent puller brand with the PDR acronym standing for “Paintless Dent Repair”. They produce a wide variety of kits but when it comes to value for money but the 22 piece kit offer the best value for the money. Other kits that they offer include a 28 or 32 piece kit to suit your requirements.

In terms of its performance tackling car dents, the brand state that the pulling tabs are guaranteed not to break. As long as you wash them after glue has been applied to them, they should be long lasting and suitable for year of use.

Other features of the Super PDR Car Dent Puller Kit include:

The Super PDR is an excellent all-round dent puller kit that comes with everything you require to remove most car dents. Whether you are a professional or it’s your first time attempting to use a dent puller, using this kit should allow you to tackle any dent.

A cheaper and smaller option to the BBKANG alternative above is the ARISD car dent puller kit. It includes 16 pulling tabs that range from 0.59 x 0.59 to 2.17 x 1.57 inches in size and is ideal for pulling out small dents.

The main compoment of the kit is the slide hammer t-bar dent puller tool. It has a lever type design and it can also be reconfigured into two different t-bars for different dent pulling tasks.

Other features of the ARISD Car Dent Puller Kit include:

The ARISD car dent puller is a complete kit and is also one of the cheapest per piece included. Most of the alternatives come at double the cost when compared to this kit and realistically, you don’t get much more.

The AUTOPDR® dent puller uses a bridge construction for tackling big or small dents. It’s an affordable option but you need access to a glue gun to be able to use the tool correctly. According to the brand, the design has been continuously upgraded for even better results.

Other features of the AUTOPDR® Dent Bridge Puller include:

It’s a low cost dent puller that is more involving than a suction cup but provides excellent results. Compared to previous models by the brand, this version is easier to use and more durable. However, it’s important to note that you require a glue gun to use this dent puller.

Now that there are a range of paintless dent repair tools circulating the market, there is no need to take your car to an auto body shop. Instead you can use DIY methods to pull the dent out whilst saving a lot of money at the same time.

Finding a dent caused by hailstones, parking dings or malicious damage can be heartbreaking. Not only is it frustrating but it also devalues your car quite significantly when you come to sell it. Investing into a quality and easy to use dent removal kit will solve the issue and they can be reused multiple times for any future dents too.

To help you make an informed buying decision, we have produced the below buying guide regarding car dent pullers. 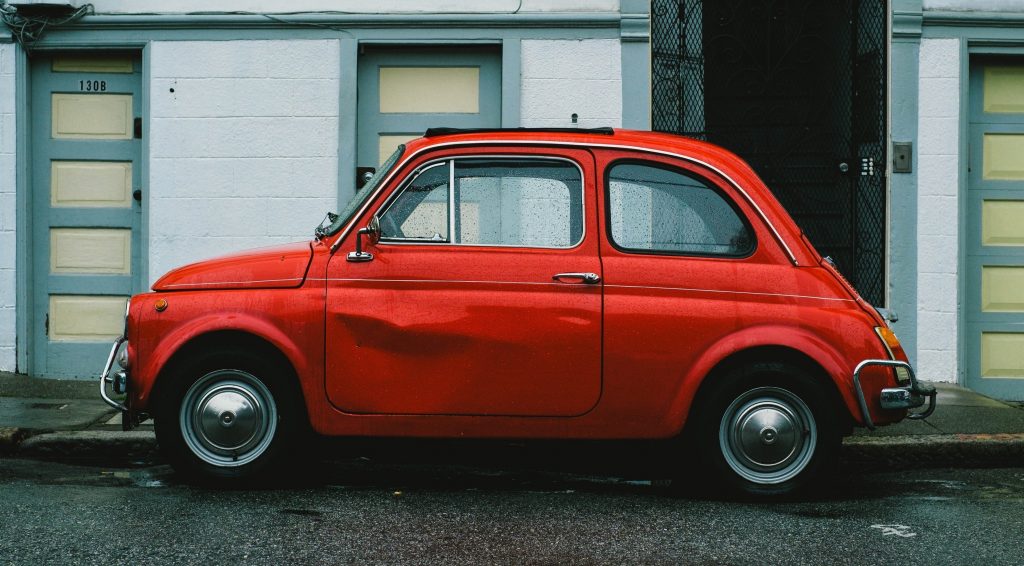 Everyone will have their preference when it comes to pulling out car dents. Some will want to use precision paintless dent repair tools whereas other may want the cheapest solution possible. Below are the most common types of dent puller tools.

One of the most common methods of pulling out a dent is by using a T-Puller/T-Bar. They use an pulling tab at one end and the other end form the “T”, which you can use to pull upwards to remove the dent.

Another popular methods that also uses pulling tabs is a bridge puller. These are more suitable for longer dents as it is a longer device that can spread out further. You are able to adjust the legs to the size of the dent for maximum precision.

The purpose of removal rods is to push the dents out from behind. They use strong stainless steel rods with various ends that allow you to get into the hard to reach areas. It’s advised to have a variety of different lengths for maximum compatibility. You can even use multiple rods to increase your chances of pushing the dent out.

The dent lifter tool is the most expensive and is a combination of the t-bar and bridge mechanisms. It uses glue pulling tabs and various adjustments to allow you to tackle any dent with ease. As you can see from the below dent lifter, it is a fairly easy to use paintless dent removal tool. 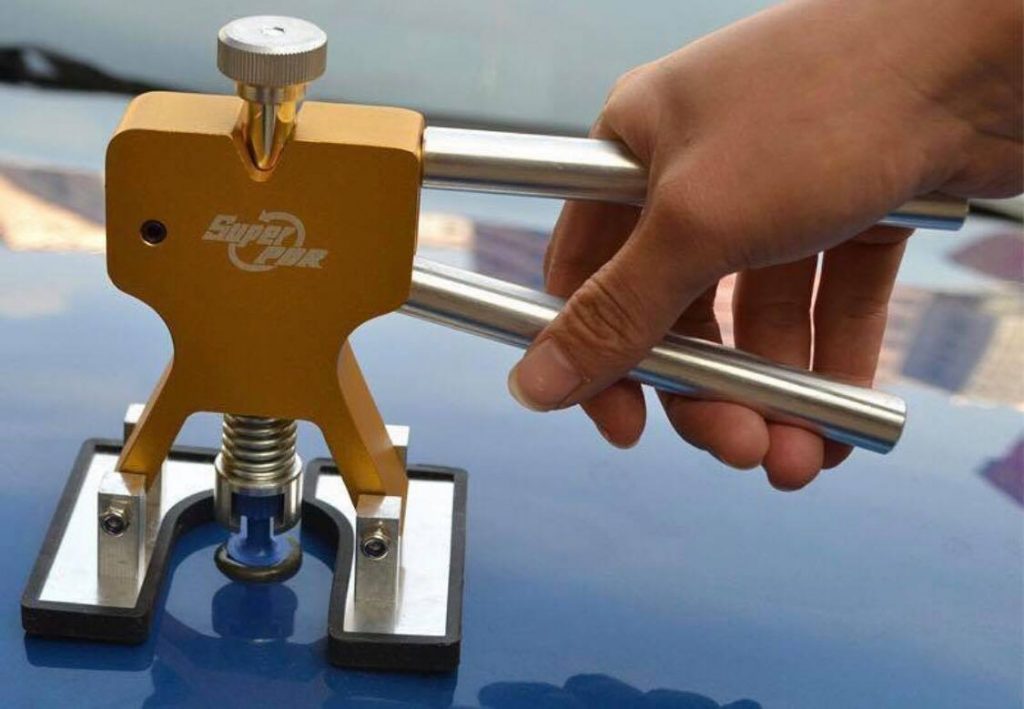 When using paintless dent repair tools that use glue, it’s important that you maintain the pulling tabs. This will involve using an alcohol solution to remove the glue on the tabs after using them. Failing to do this can make them unusable for future dents.

Most kits come with a glue gun included as well as many sticks of glue. For the best results, it is advised that you allow the glue to fully pre-heat before placing the glue upon the pulling tabs.

Once you have removed the dent in the bodywork, you may notice small bulges where the dent was pulled out. In order to rectify this defect, you can use tap down tools that are available in a range of shapes to remove the bulges.

There are many video tutorials that display the use of hot water to remove dents. Although this can be quite successful, it is really not a reliable or suitable solution. Most of the time you will be required to get under the car and push the dent out, which may not be possible for all dents.

However, if you are using a suction cup dent puller, using hot water or a heat gun can assist with pulling out the dent.

Although dent pullers are an excellent invention, they will not be able to fix every dent. Some may have torn the bodywork or have caused the metal/plastic to crinkle. Once fixing a dent, you may also require a suitable car polish to remove scratches that have become apparent after using the tool.

Investing into quality paintless dent repair tools can save you a fortune in the long run. Repairing a single dent at an auto body shop can cost over $200 and over. However, by using a dent puller of your choice, you can repair dents at a fraction of the cost and they are also reusable too.

All of our recommendations cover a variety of different car dent pullers and do not require any professional knowledge to use them.